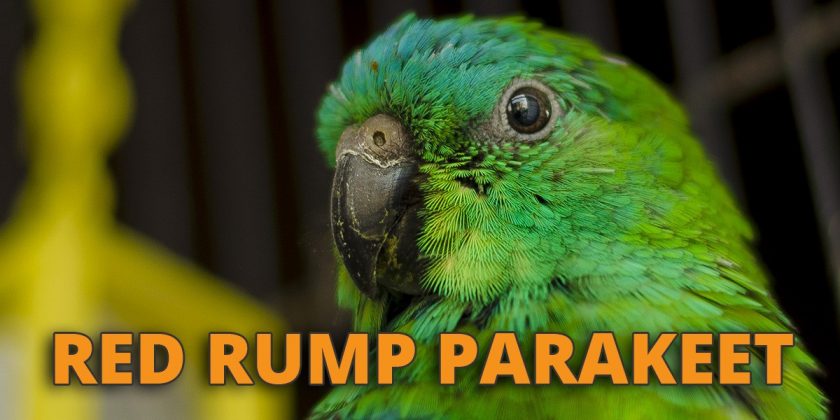 The Red Rump Parakeet is a small, colorful bird that is becoming popular in the pet bird trade. This bird has a more pleasant sounding call than the sometimes harsh voices of the more commonly kept budgies. Their size and temperament make them an excellent choice for someone who does not want the time commitment that comes with a larger parrot.

Overview of the Red Rump Parakeet

The Red Rump Parakeet also goes by the names of Red-rumped Parakeet, Red-backed Parrot (or Parakeet), Redrump, Grass Parrot, Ground Parrot, and Green Leek according to IUCNRedList.org. The scientific name of this small companion parrot is Psephotus haematonotus, and the single sub-species is named Psephotus caeruleus. 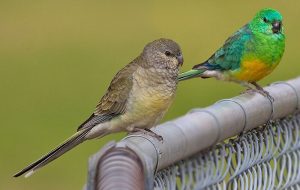 Red Rumps are native to southeastern Australia, where they can be found at elevations up to 1000m (3280 ft) in both woodlands and open grassland and farmland. Their wild population appears to be increasing, and they are in the category of least concern on the IUCN Red List.

These birds’ plumage is primarily green, and only the male has the distinctive red rump. Females have a green rump, thereby making visual sexing of these birds very easy in adults. Young males do not display the red patch, so DNA testing is required to sex baby birds. They have long tails and measure 10.5 inches (27 cm) and weigh from 1.9-3 oz (55-85 g).

What do Red Rump Parakeets Look and Sound Like?

The males’ coloring is a bright emerald green as opposed to the more olive green coloration of the females. Both sexes have a yellow underbelly, though it is more pronounced in the male birds. Selective breeding has introduced mutations in a variety of colors.

Their call is soft and can almost be considered a song. They can produce whistling and trilling sounds when perched and can chatter shrilly while defending their territory or bickering with others. Below is a video of one chirping away to itself. These birds are not prone to mimicking sounds such as human voices.

Personality and Behavior of the Red Rump Parakeet

Red Rump Parakeets are energetic birds that spend the day moving around their cage or aviary. They are best kept as a pair, but according to the Aviculture Hub, they are aggressive and only one pair should be kept in an enclosure. They become extremely aggressive when preparing to breed, and will attack other birds through the cage bars if they can reach them. These small birds are suitable to have around children, as their small beaks cannot cause much damage to little fingers.

In the wild, these birds spend a lot of time foraging on the ground. A distinctive behavior they engage in is to perch on the stem of small plants until it bends to the ground where the bird can easily reach the seeds. Pairs stay together year round, and males can be seen preening and feeding the female in all seasons.

Taming these birds is difficult and takes a lot of patience. You may be able to have them step up or respond to hand-feeding, but that is about the extent of the training that you should attempt. They do appreciate interaction with their human handlers, but can also be very happy amusing themselves for extended periods of time. It is very rare for a Red Rump to imitate human speech.

How do I Care for a Red Rump Parakeet?

These birds can tolerate temperatures down to around 40 degrees Fahrenheit (4.5 C) if slowly acclimated but do well in normal room temperatures when kept indoors. You should avoid housing them where they will be exposed to drafts or direct sunlight.

Minimum cage size for a pair is 30Lx20Wx20H inches (76×50.8×50.8 cm) with 1/2 inch bar spacing. Red Rumps get bored easily, so a roomy cage with plenty of room for toys and ladders is recommended to keep them physically and mentally active. Some flight time outside the cage will also be appreciated by your birds. See our guide here for details on choosing the best parakeet cage for your birds.

Their diet should consist of millet, mixed canary seed, and small amounts of sunflower seeds. This should be supplemented with grit, cuttlebone, and fresh vegetables and fruits such as spinach, apples, carrots, and broccoli. Full details on what you should feed your parakeet can be seen in our guide here. A Red Rump will molt yearly and can be given feather supplements during their molt to ease the process.

Red Rumps love to bathe, both in water and in sand. They should be offered baths daily and can be misted with a spray bottle as well. Lack of bathing will negatively affect the health and appearance of their feathers. Below is a video of a yellow mutation of the species bathing. You may need to clip their nails occasionally if their growth cannot be controlled with rough perches.

Breeding is legal and according to beautyofbirds.com, they are easy to breed and a good choice for those new to parakeet breeding. Their natural breeding season extends from July through January, and you can expect a clutch of from 4-6 round eggs. Nest boxes should be placed as high in the cage as possible, while still allowing room for the male to stand on top of the box while the female is inside brooding the eggs.

A well-cared-for Red Rump Parakeet will around 12 years in captivity. They are hardy birds but can develop some problems including eye infections, respiratory problems, feather plucking and Pacheco’s Disease.

Expect to pay over $200 to $300 for a Red Rump Parakeet, with some color mutations being more expensive. Long-term care requirements are not costly. These birds are not very destructive, and their cage and toys should last for the life of the bird. Due to their small size, feeding requirements are minimal, making this bird relatively inexpensive when compared to many other pet birds.

Is a Red Rump Parakeet Right for Me?

A pair of Red Rump Parakeets is a nice addition for the pet bird owner who would like to appreciate the visible and aural beauty of small parrots without some of the more intense care requirements of other species. Minimal interaction with your birds will be sufficient if they are housed in a spacious cage with plenty of toys, and you will be rewarded by observing them interact and listening to their soft calls.