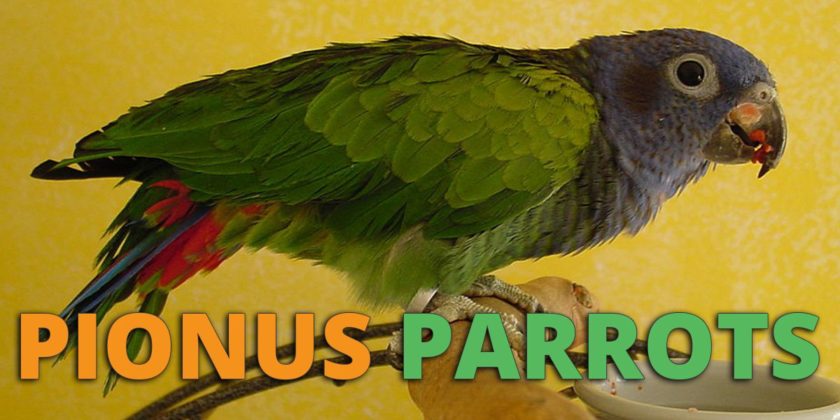 Pionus Parrots are small to medium-sized birds that can often be overlooked when considering adding an avian family member. In many circumstances, they can make excellent pets. These birds may not be for everyone, but they could just be the perfect choice for the prospective parrot owner. Let’s take a look.

The family of Pionus Parrots is comprised of 7 distinct species, some of which are quite rare, and all belonging to the scientific genus Pionus. They all share a distinctive short, square-shaped tail and large eyes surrounded by a bare eye ring. A triangle of red feathers around their vent rounds out their common coloration characteristics.

Individual species have very diverse colorations. Pionus menstruus, commonly called the Blue-Headed parrot or Blue-headed Pionus, has a predominately green body and a bright blue head. On the other hand, the White-Crowned Parrot, or Pionus senilis, has green body feathers topped with a white forehead and crown. Then there is Pionus fuscus, also called the Dusky Parrot, whose coloration is primarily blue-grey.

According to parrots.org, the Blue-headed Pionus is 10.9 inches (28 cm) long and weighs anywhere from 8.2 to 11.5 ounces (234-295 grams). All of the Pionus species fall into this general size range. There is no visual difference between males and females so DNA or chromosomal testing is necessary if you need to know their gender.

These companion parrots are native to the Caribbean as well as Central and South America. They favor rainforest and humid lowland forests where they forage in the canopy. In the wild, they feed mainly on seeds, fruits, and flowers.

A feature of the Pionus family that makes them attractive to some prospective owners is that they are very quiet by parrot standards. They make a panting noise when frightened or excited. This can happen when they are being petted and is perfectly normal. The video below demonstrates this sound. Pionus Parrots are not known as great talkers, though owners with higher-pitched voices may have more success with getting human-like sounds from their bird.

These parrots are rather reserved, gentle and friendly. Their short, broad tails make them appear as small, stockier versions of their larger Amazon cousins. Another thing they have in common with the larger Amazon parrots is a distinctive, sweet, musky odor. This is something you should investigate if you are considering adding one to your home. Their coloration is not as striking as the larger Amazons, which may be a reason they are not as popular as some other parrots.

The Pionus is not an overly energetic parrot and is not a big fan of hands-on play. They are affectionate, however, and will often bond to multiple individuals, making them a good choice for a family with children. Some males will bond too strongly to an individual and may try to defend it against other family members, so beware of over-bonding with your Pionus.

When introducing them to your home, they may be shy and reserved for a time, but will quickly acclimate to their new surroundings as long as you supply plenty of your attention. They do like to be preened by scratching their heads and necks, and this activity often spurs them to produce their excited wheezing sound. Pionus Parrots do not usually like to cuddle.

Some Pionus owners keep several of them, and this seems to work out well for them. You should take care not to house them with other much louder or very active birds as the Pionus may end up getting less attention as it quietly goes about its business. It is an active bird and should have plenty of toys and perches for mental and physical exercise.

After giving your parrot a few days to get used to its new home and your voice, you can start to train it by offering a treat. Once you build up some trust then try getting your bird to step-up on your hand. This can take several weeks, so patience is key. Once the bird is no longer shy and feels comfortable with you, repetitive voice training can be started.

How Do I Take Care Of My Pionus Parrot?

A comfortable indoor temperature range is about 60 to 80 degrees Fahrenheit. According to animal-world.com, the cage should be at least 24 x 24 x 36 inches, and a larger cage is preferred. Bar spacing of 3/4 inch is recommended, though the popular Blue-Headed variety can handle a bar spacing of 1 inch.

Mental and physical exercise is key to your parrot’s health and this is accomplished by providing plenty of toys and climbing opportunities for your bird. In addition, they love to be out of their cage and receiving your attention.

Nails should be clipped if overgrown, though you may be able to control it with some rough perches spread around the cage. Being native to the rainforest, they love the rain and this can be simulated with a hand-held shower and lukewarm water. You should provide some mineral blocks or items to promote beak grooming as they have a tendency to have longer beaks than most parrots.

Your parrot will have its first molt at around 1 year of age, and then molt several times a year to replace damaged and worn feathers. Beautyofbirds.com states that for these parrots, a seed-based diet supplemented with plenty of fresh fruits and vegetables is the best approach. Enriched pellets can be used if you cannot provide enough nutrient-rich, fresh food.

According to theparrotsocietyuk.org, Pionus Parrots are relatively easy to breed and a pair will produce a clutch of 3-4 chicks. They can be bred when around 3 years old, with the breeding season running from April into early summer, and their eggs are large for their body size.

In captivity Pionus Parrots can live up to 15 to 25 years, so deciding to have one implies a major commitment not to be taken lightly. They are prone to obesity with lack of exercise and Vitamin A deficiency due to inadequate diet. These are controllable conditions with proper care. These birds are also susceptible to respiratory ailments and other parrot diseases such as aspergillosis and psittacosis.

How Much Will It Cost To Own A Pionus?

Pionus Parrots normally costs from $900 to $1700 depending upon the variety, but on average they cost $1200. Baby parrots can be found for lower amounts and higher prices are charger for rarer sub-species.

A roomy cage will cost at least several hundred dollars with toys and perches. Plan on buying your bird plenty of fresh food, so you need to add that to your yearly bird-keeping costs. Regular vet bills add up too. Remember, these little guys can live for 40 years.

Is A Pionus Parrot Right For Me?

If you can afford the monetary investment and are willing to spend the time with your bird, a Pionus can be a great pet. If you have a family, this bird’s habit of bonding with multiple members is a factor in their favor. Though they are a little more subdued in behavior and appearance, Pionus owners rave about their pets. Take a look at this Blue-Headed Pionus video above while you think about it.