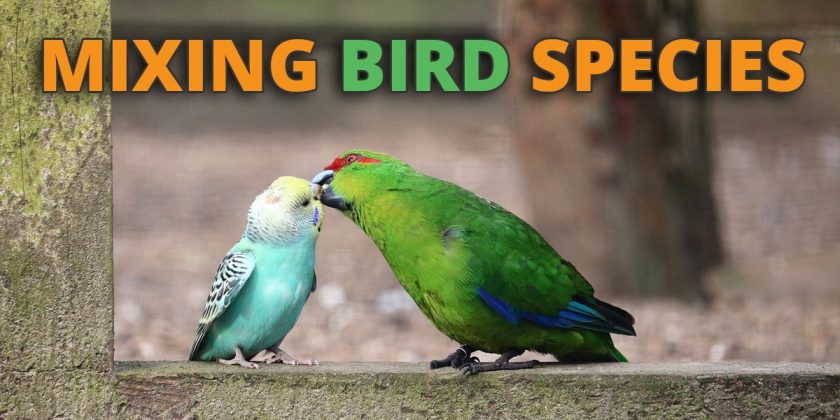 Many pet bird owners keep more than one bird in their home. Some devote large portions of their house to elaborate bird rooms or build outdoor aviaries capable of housing many individuals. In some cases, they have fallen in love with a particular species of bird, in which case there is no question that the birds can live together. They may not always bond in the way their owners may want them to, but there is no issue of species compatibility.

Other bird owners may want to diversify and care for specimens of multiple species. After all, in the wild, many bird species live and interact in relative harmony. This can be a challenging and rewarding undertaking, as it presents an opportunity to observe the similarities and differences in various species in a direct and personal way.

An issue that needs to be addressed when considering housing multiple species together is the compatibility of the types of birds you would like to keep. There are some general guidelines that we will take a look at, as well as some common sense practices that you can employ if you find yourself in a situation where you are caring for birds of different species. 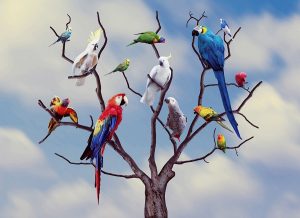 These are generalities that may be overshadowed by behaviors inherent to a particular species of pet birds. They should be looked at as a first cut when deciding if various types of birds can live together. There are bound to be exceptions based on individual bird’s personalities.

Finches are popular for mixed aviaries or flights. While they are generally compatible, there are some species that can pose problems. According to finchinfo.com, the behavior of finches can be categorized into three tiers: passive, pushy and aggressive. Mixing the categories can cause problems and should be avoided if possible. To see this in practice, below is a video of a mixed species finch aviary:

It is highly advisable that you thoroughly research any parrot species you are intending to mix, and have an alternate plan if it does not work out the way you had envisioned. Below is a video of a diverse group of parrots being showered in their aviary.

If you are mixing species of parrots inside your home, they should have their own cages. They can share out of cage activities, but need their own place to return to when they need to feel safe. Large cages may be suitable for mixed groups of finches or smaller birds, but caution needs to be exercised that they are not crowded. They should be closely monitored and perhaps moved to prevent aggression and injury.

Time spent out of the cage is critical for your parrots and can be complicated if you have more than one species that does not play well together. This can double the amount of time you need to spend to keep your birds emotionally stable. Two separate rooms may be needed in extreme cases of incompatibility.

Aviaries are the preferred method for housing birds of multiple species together. The more room the better, as it allows the birds to have their own space and reduces the level of stress among all the inhabitants. According to beautyofbirds.com, here are some tips on creating a mixed species aviary.

Providing the proper care for one species of bird can be challenging in itself. Take that into account before venturing into the realm of multiple species. If done successfully, it will add another layer to the rewards that you can obtain from interacting with these beautiful and intelligent creatures.