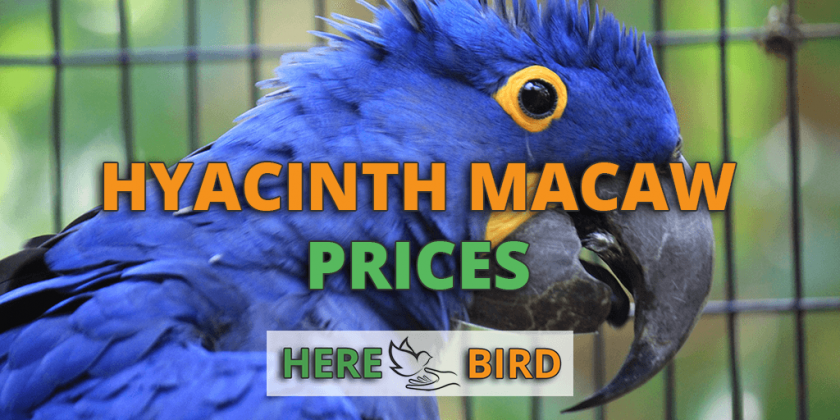 The Hyacinth Macaw is the world’s largest parrot species and also one of the most expensive to buy. Whilst large in size, they generally have a soft personality, although don’t be fooled because their beak is incredibly powerful. Buying one of these birds will set you back a large amount, as we shall see below.

So how much does a Hyacinth Macaw cost exactly?

A Hyacinth Macaw will be priced at around $10,000. Sometimes you can find lower priced Hyacinth Macaws for $8,000, but at the higher end it’s not unheard of for one of these Macaws being sold for up to $12,000 or even more.

The initial upfront cost for buying a Hyacinth Macaw bird itself is quite substantial. You’re likely to be a fairly wealthy individual if you’re buying one of these birds and so it makes sense to buy high-end equipment and supplies for your high-end birds. When buying a new bird, you might be able to include some of the items listed below as part of the deal. The costs over the lifetime of the hyacinth can include the following:

Compared to the average bird cage, hyacinth macaws are much bigger and so they need cages that are much larger in size. Hyacinth’s also have very powerful beaks and so the cages need to made of stronger and thicker materials. Cages made from stainless steel are the most expensive and highest quality option. To save space in your room you might want to consider a corner bird cage, whereas to provide more space for your bird you might want a double bird cage. 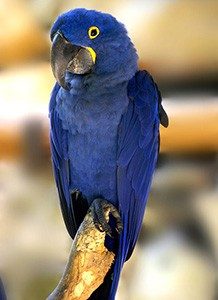 Hyacinth Macaws come with a very beautiful and attractive coat of dark blue feathers. Those with a good quality plumage which appears healthy and vibrantly colored will be able to command higher prices. Conversely, if the Hyacinth has any marks, scars or features that distract from the beauty of the bird then this will drop the price. However, if the bird happens to have a color mutation or unique feature that makes the macaw appear more attractive then owners may charge a higher rate.

DNA testing can be performed on a hyacinth to determine its gender, genetic lineage and also if it has any inherited diseases. You can usually buy a breeding pair of hyacinths at a discount compared with buying 2 birds each on their own. Breeding pairs should be DNA tested to check that the macaws are not related and thus unsuited for breeding. Male and female hyacinth macaws tend to go for the same rate. To see a hyacinth macaw in action, check out the video below:

How age affects the price of a hyacinth?

Hyacinth macaws that no longer need to be weaned and are entering adolescence or young adulthood will be priced at the highest amount. Baby hyacinth macaws might be cheaper but are not recommended because you need to spend an intensive amount of time looking after these birds. They are also very weak at this stage and so only experts should look after them.

Hyacinth macaws can live to a ripe old age with lifespans of up to 40 to 50 years. Old aged hyacinths will be cheaper to buy but there could potentially be issues with the bird. It’s harder to train a bird that is older as it may have picked up bad habits or idiosyncrises. They are also more likely to suffer from medical problems which you would have to pay for.

Since the hyacinth is so expensive, you’re unlikely to find one which you can adopt for free from a bird sanctuary. 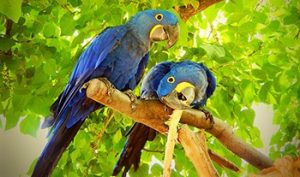 When and where to buy a hyacinth macaw?

Hyacinth macaws are quite rare and so it can be difficult trying to locate one if you don’t live near a metropolis. This is because they are difficult to breed and baby hyacinths have a high mortality rate.

Because they are native to Brazil, the price for hyacinth macaws in this country may be lower. However, you need to be very wary that the bird has not been illegally trafficked in this country.

Picking up a hyacinth for transportation can be quite a hassle since the macaws are so large. You’ll need a strong travel cage costing around $200 and you also need to factor in the fuel costs for your trip.

Because they are a rare bird and difficult to breed, prices are unlikely to fluctuate throughout the year and so remain constant.

Legality of owning a hyacinth macaw

Hyacinth’s are endangered birds and the international trade of this bird is illegal. Illegal capturing from the wild is frequent because they are such valuable birds. If you’re looking to buy a hyacinth then it should only be obtained from a breeder within your own country and from a registered and legal source. Find your countries bird associations and national organizations because each state and country will have its own unique set of rules.

Warning signs to look out for

When buying a hyacinth macaw it should come with a bird band on its leg. This will have a number that will provide details about the history of the bird that you can look up. Avoid hyacinth macaws that do not come with a bird leg band as this indicates that something illegal is occurring. Also, if the price of the bird is exceeding high or low compared to the normal price then you should also be suspicious. This can indicate either a scam is going on or that the bird is diseased. 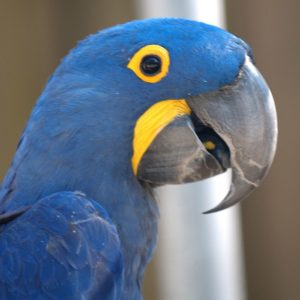 These large birds are intelligent and can’t be left in a cage all day long. The cage will take up a fair amount of space in your home and so planning ahead for this should be considered. You should ideally be spending several hours of out of the cage time with your birds each day. They are social creatures and so should be bought as a pair, however, this is not always possible and so another similar sized macaw as a companion can sometimes work. The best case scenario would be if you worked at home and so can spend most of the day with these birds.

Their powerful beaks mean they can shred up items in your home rather rapidly. To prevent this you should spend time training your hyacinth so it bonds properly with you and prevents future behavioral difficulties. This is easier when the macaw is younger and will become more difficult as the bird ages and gets set in its ways. This can also be done to prevent the birds from shrieking and making a nuisance with noise. You should get your bird to interact with all members of your family so that the macaw is properly socialized.

When considered in total, hyacinths can command a large amount of time, energy and attention.

Where can you find a hyacinth macaw for sale?

We recommend contacting your local bird association or national organization if you’re going to go ahead with a purchase. They can help you to avoid the illegal trade and guide you locally on how to find a certified breeder and avoid suspicious behavior.

Hyacinth macaws cost a lot to take on financially. However, the space demands in your home, the energy needed and the time required are also important considerations to think about. Only wealthy individuals can really take on these creatures. These birds are not recommended if you’ve never owned a pet bird before and they’re only for the most experienced of bird owners. If you fulfill all of these obligations then this blue, gentle giant may be possible to own.