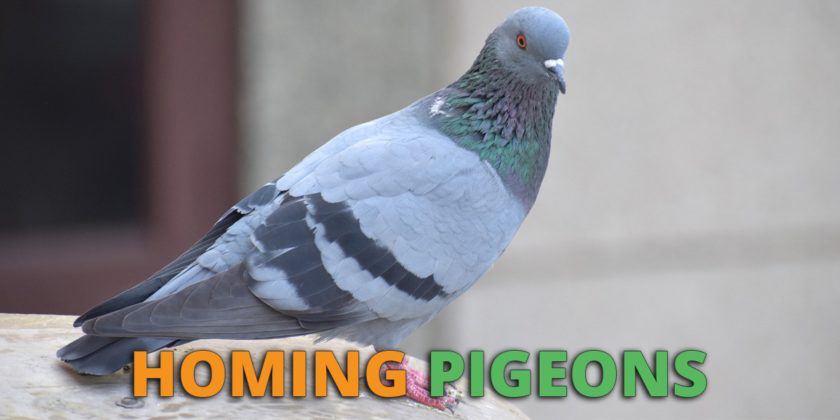 What is a Homing Pigeon?

Pigeons are part of a family of birds known as Columbidae. The family comprises more than 300 distinct species of what humans call pigeons and doves. Though we name the birds differently, there is really no scientific reason to do so. The words pigeon and dove are interchangeable from a scientific point of view.

Humans have partially domesticated some species of pigeons over the centuries. Carrier pigeons were used in ancient times to carry messages quickly over large distances and were used in World Wars I and II for the same reasons. They have a very distinct, fleshy growth on the top of their bill. Fancy pigeons are often bred to be ornamental and do not have the same capacity for flight as do some of the other pigeon species.

According to the BBC News, there is some controversy over this practice as the birds can be subject to more stressful flight over increased distances leading to an increased rate of mortality.

How Do Homing Pigeons Work Out Where To Go?

This question has long been a mystery and is still an open question, though there are some theories being tested by ornithologists and researchers. Most scientists agree that the birds use solar and magnetic clues to help keep on course.

Recent developments, reported on phys.org, indicate that there may be more going on here. A team of Swiss and South African scientists now theorize that the birds have some kind of internal gyroscope and use the earth’s magnetic field to help them find their way. Here is a video that discusses pigeon navigation.

What Do I Need To Train Homing Pigeons?

Before actually training pigeons, you need to obtain the birds themselves and the other equipment that is required. This includes building a home, called a pigeon loft, plus having the proper food on hand when they arrive. Other variations such as dovecotes tend to be much smaller. 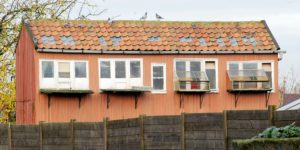 (Example of a pigeon loft). 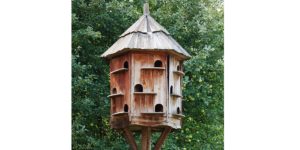 (Example of a dovecote).

Your pigeon loft can be self-made or you can order some varieties that are already constructed. Size is a factor as each pair of pigeons needs about 10 cubic feet of space inside the loft. You can always expand later, but try to give it some thought and determine how many pigeons you plan on keeping.

Some considerations when building and placing your loft is that it be in an area free from obstructions like wires, trees, and lampposts as these will negatively impact your ability to train your bird. The loft also needs to keep the birds safe from predators. It will also contain a trap door used for releasing your pigeons. If you plan on breeding them as well, separate quarters will be required for the parent and offspring.

You should do some research and find a breeder from which to purchase your birds. Prices can range from about $50 to several hundred dollars. Birds obtained from reputable breeders will already have their legs banded, saving you from this task. If you have an un-banded bird, you will need to accomplish this yourself, as all your birds should be banded for the sake of identification.

When introducing new pigeons to an established flock, you need to segregate them for a couple of weeks, so some additional space will be needed while they adjust.

Feeding is best done with high-quality pigeon feed, and the feeding needs to be done in a systematic way. Feed your pigeons twice a day, and only leave the food available for 15-20 minutes before removing it. Fresh water should be accessible all day long. Some grit is also useful as it will help with the bird’s digestion.

How Do I Train My Homing Pigeons?

Now that you have set up your loft and supplies and obtained your birds it’s time to train them. It is best, if possible, to raise homing pigeons from when they are chicks to get them used to being handled. If this is not possible, you should begin when they are 6 to 8 weeks old. A nice first-hand account of training can be found here.

At this age, they will be able to figure out how to get in and out of the loft using the trap door. As your bird leaves the loft, it will gradually become familiar with its home surroundings, increasing the chance of successful training. Here is a nice video of a birder with over 20 homing pigeons.

Attempt to stick to a regular training schedule. Make sure that your birds have an incentive to return by always providing quality food, a comfortable loft, and by giving your pigeons plenty of attention.

Once they know how to use the trap door, you can start training them to return home. Several times a week, take them about a mile away and release them. Transporting them from the loft to the release point should be done using a basket or crate.

Gradually increase the distance from the release point to the bird’s loft. Add about 5 miles per week, being careful to look for problems. If your pigeons are having difficulty with the distance you choose, scale it back until they are comfortably returning home with no issues.

Go out in a different direction each time you go out with your birds, to get them acclimated to returning from any locale. As the distance increases, some of your birds may tire and not return in a single day as they were previously doing. If they return after more than one day you should reduce the distance you are expecting them to cover until they build up more strength and consistently return the same day they are released.

Bird loss is always a possibility when dealing with homing pigeons. There are inherent dangers outside of the loft, and birds can be taken by hawks and predators.

You should join a local pigeon club which often has a process to report lost birds. This is where leg banding is critical, as it is the best means of identifying your birds. If you experience severe losses, you may need to change either the distance or direction of the release point. It could be that your pigeons are flying over territory exceptionally prone to predators.

Want to know more about looking after pigeons? Then check out our guide to the secret use of pigeons during World War 2 here, our article on pigeon lofts or even our guide to dovecotes.