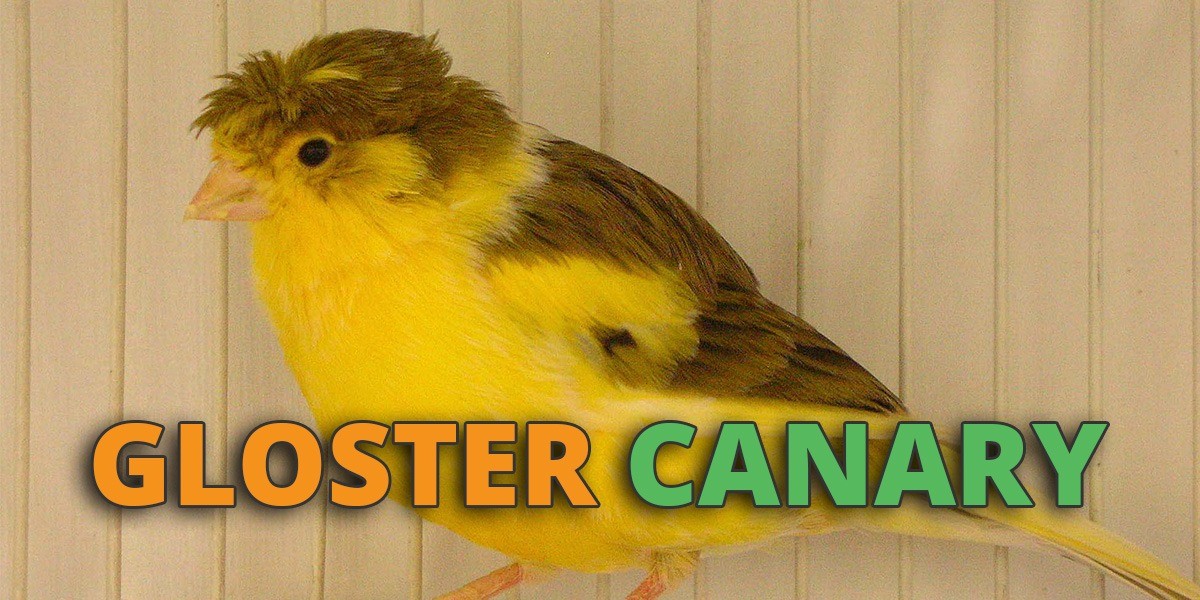 The Gloster Canary is a small, active member of the canary family. Like all canaries, the Gloster Canary is a singing bird, though it is louder and not as melodic as some canary aficionados may prefer. Its coloration and appearance have made it one of the more popular canary species since its introduction in 1925.

Overview of the Gloster Canary

Gloster Canaries have short, stubby bodies measuring about 4 1/2 inches (11.5 cm) and can weigh anywhere from 1/2 to 1 ounce (12-29 grams). According to animal-world.com, they can be found in all canary colorations with the exception of the Red-Factor colorings.

These small, singing birds are primarily cage birds that are kept for their singing ability and distinct plumage. Canaries are happy to spend their time with other birds and unlike parrots, do not need nor desire much human interaction. 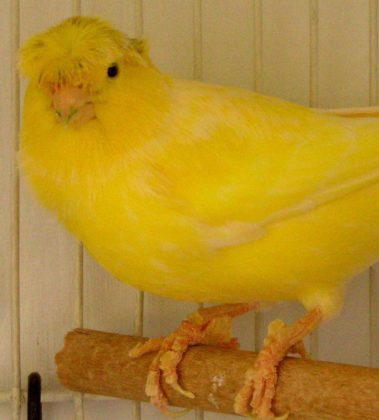 Gloster Canaries do not occur in the wild, being the product of selective breeding in the early twentieth century, though their ancestors hail from the Canary Islands and the Azores. The breed was first recognized as a new strain at the Crystal Palace exhibition in England in 1925. The Gloster is the product of breeding the Roller Canary, Border Canary, and the small Crested Canary.

Its scientific name is Serinus canaria domesticus and it is also commonly known as the Gloster Fancy Canary. Two subspecies are the Corona or crested Gloster and the Consort which has no crest. The crest, which can be seen as a Beatle-like haircut, is the most distinguishing feature of these birds.

Though female canaries can make short calls and have sweet voices, only the males truly sing. This makes them fairly easy to sex for breeding purposes.

Vocalization and Appearance of the Gloster Canary

The Gloster Canary is a very active bird that needs a roomy cage with enough room for it to move around freely. They are not noted for their song, though like all canaries the male does sing, but not as sweetly as other types of canaries. Their song can also be a little louder than other canaries.

The Coronas or crested birds have a round crest that radiates out from a center point. It is definitely the more visually striking of the two subspecies. In the video below, you can see a white male Gloster Canary with its distinctive crest.

What Behavior Can I Expect From A Gloster Canary?

Gloster Canaries are quite happy to be kept in pairs and require little human interaction. Male kept singly will spend their day singing and flying from perch to perch in their cage. If you are keeping multiple birds, it is best not to house two males together. According to RightPet.com, two males may become aggressive due to their territorial nature.

As these birds will not be handled often and have small beaks, they are a good choice if small children will be involved. They are also a great pet bird for those who do not want the responsibility of daily interaction that comes with many other pet bird species. Gloster Canaries are meant to be observed and appreciated, not necessarily handled and petted.

With patience, you may be able to train your bird to step up on your finger or hand. This is about the extent of training that you should attempt, as canaries are not known for performing tricks. You can help in training your males to sing by playing high-quality recordings of canary song while they are young.

How Should I Care For My Gloster Canary?

Glosters should be kept at temperatures of between 60 and 70 degrees Fahrenheit, though they can tolerate temperatures as low as 40 degrees for short periods. Canaries are often kept in cages that are too small, and at a minimum, you should have a cage that measures 24x24x24 inches with a 1/2 inch bar spacing. Bigger is better due to their exercises requirements.

These birds cannot climb and get their exercise from flying from perch to perch. Your cage should have a variety of perches of differing diameters to promote healthy feet. At least one perch should be located high in the cage where your bird can roost for the night. Canary cages should be placed high in the room so your bird is looking down at you. Cage placement should be in an area free of drafts to protect your avian friend.

These birds molt, generally in the summer. While molting, your male may reduce its singing or even stop altogether. This is standard behavior and is no cause for alarm. Bathing is important during molting periods, and cold water baths should be offered daily. Warm water shouldn’t be used as it can cause skin irritation. When not molting baths should be offered less frequently, as your bird can catch a cold. Nail clipping should be done regularly as needed. Some rough perches may minimize the need to clip their nails.

Breeding is legal and these birds are fairly easy to breed. A caution is not to breed two Coronas Gloster Canaries as the brood will likely contain dead birds. Beautyofbirds.com indicates that this is due to the dominant gene that produces the crest causing skull deformities if present in both parents. Nests are used for egg laying and a female will produce from 3 to 6 eggs, one per day. Breeding season is usually from December to April.

Diet consists of a high-quality canary seed with some greens and a cuttlebone for additional calcium.

How Long Will My Gloster Canary Live?

The lifespan of these singing birds is about 7-12 years. They are relatively healthy birds, though some are prone to ingrown feather deformities. Birds with this condition should not be bred. Most other canary ailments are due to improper diet, so be sure to use vitamin enriched seeds.

Gloster Canaries will usually cost you about $100. They are relatively inexpensive to keep as pet birds go, as after their cage and food they do not have high demands for toys and are not destructive. Nail clipping is the only regular maintenance you may need to provide.

Should I Get A Gloster Canary?

These birds make fine pets for those who desire a low-maintenance bird. They do not demand excessive attention, and if kept in pairs will be quite happy by themselves, offering their songs and beauty for your appreciation. See the video below for an example of a Gloster Canary happily singing.