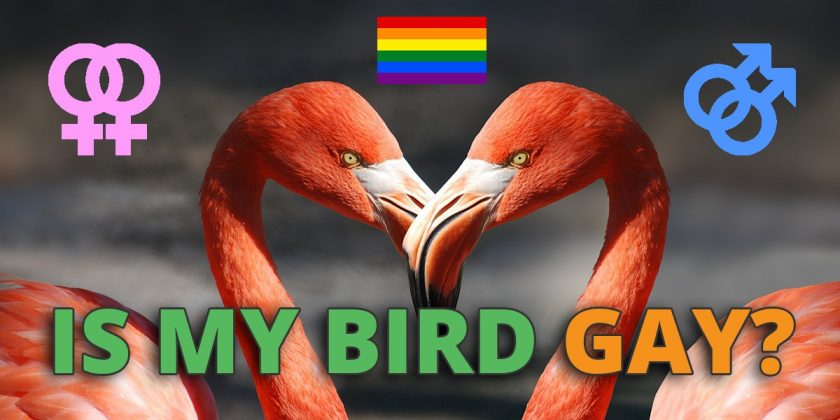 Now here is a question that a large portion of the pet bird owner community possibly never even considered. We might think that homosexuality does not exist in birds or parrots. Since a major drive in the animal kingdom is to reproduce, and because homosexuality does not serve this function, we may assume that there is no place for same-sex relationships. We would be making an incorrect assumption.

In fact, many species of birds engage in homosexual behavior. Ornithologists have known this for some time, but the casual pet bird owner may not. The form of this interaction is not consistent across species, with some birds exhibiting only male same-sex relationships and others only female. There are some species where homosexual activity occurs between either of the sexes. Don’t believe gay birds are possible? Watch the video below and you’ll see two male birds engaging in a mating ritual:

The evidence of homosexual behavior in birds and other animals has been controversial in certain conservative quarters where a moral argument against human homosexuality is prevalent. Research bias related to these beliefs may be the reason that only since the 1990s has homosexuality in birds has been officially observed on a large scale. The fact that many bird species are not sexually dimorphic, meaning both sexes look identical, has also been a factor in the inability to adequately study homosexuality in wild birds.

Let’s take a closer look at this phenomenon in the avian world and see if we can shed some light on what drives this behavior.

Arguments have been made that homosexual behavior does not further the survival of the species and therefore is counter-productive to its long-term viability. Studies seem to indicate that this is simply not the case. There have also been theories put forth that homosexual behavior in captive birds is due to the unnatural conditions in which they live. 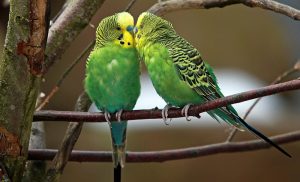 Here are the results of some studies into what factors drive birds to engage in homosexuality.

According to nationalgeographic.com, a study conducted by wildlife ecologists at the University of Florida in Gainesville found that elevated levels of mercury led to an increase in homosexual behavior in white ibises. The male-male pairs acted as though they were a heterosexual couple, engaging in copulation, nest building, and staying together on the nest for a month despite the lack of eggs.

The study was done to examine the effects of mercury that is prevalent in the Everglades from industrial runoff. The team divided a group of 160 into 4 groups made up of an equal number of males and females. At around 90 days of age, three of the groups were fed food laced with varying concentrations of mercury, and one was fed mercury-free food.

The birds were allowed to freely choose their mates. A tendency toward choosing mates of the same sex was seen in the groups exposed to mercury, leading to a 15% decrease in the number of offspring. Mercury also impacted traditional couples, with females producing 35% fewer babies than the mercury-free control group.

The fewer parenting responsibilities a bird has also seems to have a direct influence on their inclination to engage in same-sex relationships. An article on nature.com talks about studies done by Geoff MacFarlane, an ecologist at the University of Newcastle in Callaghan, Australia. His conclusion is that the less effort a bird puts into parenting, the more time it has to engage in homosexual activities.

Records of 93 species of birds that exhibit homosexuality in the wild were analyzed by the research team. It was found that same-sex pair bonding, mounting, and courtship were prevalent, with 38% engaging in female-female pairings and 82% in male-male couplings.

Though the underlying rationale for actually engaging in same-sex activities cannot be fully understood by their research, the fact that lessened parental duties left the birds free to engage multiple partners of either sex was evident. Different species of birds employ varying parental strategies. The team observed the relative contribution of males and females to parental chores such as nest building as well as the feeding and defending of babies.

Both genders tend to engage in more homosexual activity as their role in parenting diminishes. Species in which females dominated the parenting were found to show little to no female-to-female pairings and the same scenario held true for male birds. This has been put forth as an explanation for homosexual behavior that does not negatively impact the birds’ ability to reproduce. It appears that this behavior is only engaged in when it does not pose a problem for the survival of the species.

Reasons for engaging in homosexual activity range from practicing courtship display, forming alliances, or reducing social tensions. The study is inconclusive on the question of whether homosexuality serves an adaptive purpose or is simply a by-product of evolution.

Strong Bonds Whatever the Gender

According to a report by BBC Nature, a study performed by scientists at the University of California Berkeley focused on the bonding behavior of zebra finches. They found that when given the opportunity, a large percentage of birds paired up with a member of the same sex.

In following these pairs the researchers found that they engaged in many of the same behaviors as male-female pairs. They would perch side-by-side and nuzzle beaks as a greeting. When females were introduced to the male-male pairs, the majority of the males continued in their previous relationships and ignored the females. It appears that finding a suitable mate as a social partner may be the deciding factor in the birds’ choice, with reproduction and sex as a secondary consideration. In the video below you’ll see two gay budgies that ignore a another budgie of the oopposite gender:

So Is My Bird Gay?

Based on the research conducted and the observations of both wild and captive birds, there is a chance that your bird or birds are indeed gay. Whether by choice in the wild, or the lack of choice in certain captive situations, birds have shown that bonding has many facets besides reproduction. It is another example of how humans and animals display a need to connect with another similar creature in an effort to create a fulfilling and enjoyable life.