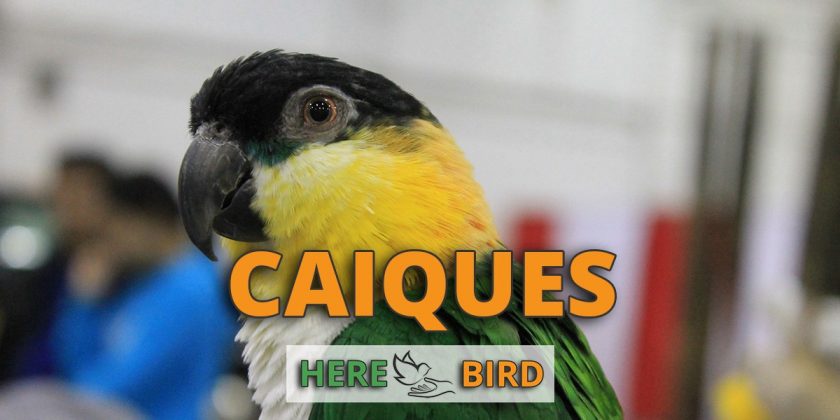 Caiques (pronounced kai-eke) are medium-sized parrots that are becoming popular with pet parrot owners due to their clownish personalities. They are high-energy birds that are amusing to observe and can form strong bonds with their human companions. Caiques generate a moderate level of noise and can be aggressive toward other birds. Some of their personality traits make them more suitable for an experienced bird owner rather than someone new to pet birds.

Caiques are companion parrots found in northeastern South America. There are two species of caiques. The White-bellied Caique or White-bellied parrot has a scientific name of Pionites leucogaster, and there are two sub-species. Pionites melanocephalus is the scientific name of the Black-headed Caique, which also goes by the name of the Black-capped or Black-headed parrot. 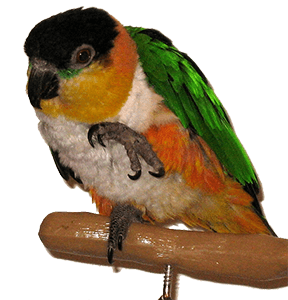 Both species measure around 9 inches (23 cm), with the White-bellied bird weighing a little more on average: 5.8-6 ounces (165-170 g) to 4.5-6 ounces (130-170 g) for the Black-headed species. Caiques favor forests in their natural habitat and are communal rosters, often gathering in groups of 30 individuals, according to parrots.org.

These parrots do not display any visible gender differences so DNA testing should be relied on to accurately sex caiques. Both species of caiques have white-bellies, with green bodies with yellow highlights. The black-capped has a black head while the white-bellied caique has an apricot colored head.

Appearance and Vocalizations of Caiques

Caiques are not the loudest parrots, but they can be noisy and are not the best choice for apartment dwellers. They have the ability to mimic sounds and whistles in their environment but are not usually considered to be good talkers. Below is a video of different caiques playing around with their owners.

One of the endearing qualities of these parrots is their playfulness. They are very active and like activities that involve movement and interaction, and demand a large enclosure to be content in captivity. Caiques are extremely inquisitive and intelligent and will do their best to get into trouble if you let them.

What Kind of Personality Should I Expect From a Caique?

Caiques are known as the clowns of pet parrots for their acrobatic antics that can include turning over and laying on their backs while playing or being handled. They are high-energy birds that spend their time moving from place to place, often hopping rather than flying. This needs to be considered if you are keeping caiques with other pets that might injure them when they are hopping across the floor.

Exploring new objects such as bird toys is a favorite activity, and they need plenty of variety to keep them mentally stimulated. They should be socialized at a young age by interacting with as many people as possible, though they still will undoubtedly choose a favorite human. Failure to socialize your parrot can lead to behavioral issues as it matures.

These intelligent companions can be territorial and stubborn at times and resort to biting or screaming when they do not get their way. Very young caiques enjoy the company of children with their quick movements, but once the bird reaches adolescence it can be prone to sudden nipping. Caution should be taken with children that do not fully understand the parrot’s body language, according to hari.ca.

Despite their size, these birds will display aggressive behavior toward other pet birds and for that reason are best kept singly or in pairs. A pair of caiques can bond with each other while still maintaining a good relationship with their human companion, a rarity in the world of captive parrots. They can be trained to perform some simple tricks and to follow behavioral guidelines with gentle reinforcement and patience.

How Should I Care for My Caique?

Caiques do not have stringent temperature requirements and will be comfortable at normal indoor settings. One of the main considerations when purchasing a caique is that they need a very large enclosure for a bird of their size. According to petcha.com, the minimum recommended size is 42Hx36Wx48L in inches (106.7Hx91.4Wx122L cm) with a 3/4 in (1.9 cm) bar spacing. Plenty of wooden perches should be included, as your bird will spend a lot of time hopping between them as well as chewing them. Their diet should consist of a high-quality pellet supplemented by fresh fruit and vegetables. Below is a video describing what it’s like to own a pet caique.

Toys that can be chewed and destroyed are favorites, so expect to be replacing them regularly. Without adequate toys to keep your bird engaged, they will resort to excessive screaming and develop other behavioral problems like feather plucking. You should plan on having your bird out of its cage for at least an hour per day for exercise and interaction. They do have a seasonal molt, which often coincides with the shorter day length of late summer. Some rough perches will help eliminate the need to clip your bird’s nails. Caiques love to bathe and should be offered the opportunity regularly. Breeding is legal and the birds can breed at any time of the year when kept indoors. The average clutch is 2 to 4 eggs that are usually white or light brown. 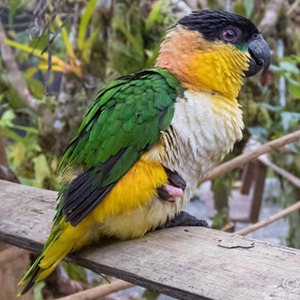 How Healthy Are Caiques?

Caiques can live around 25 years in captivity and are very hardy birds. When well taken care of, they will normally not have any health issues. As with all parrots, keep an eye out for changes in behavior that can signal an illness.

How Much Does a Caique Cost?

Expect to pay a minimum of $750 for a caique, with prices ranging up to $1,250 depending on the age of the bird and the breeder involved in the sale. Their long life and destructive behavior toward their toys will add up over time.

Is a Caique Right for Me?

A caique can make a great pet for the experienced bird owner who can better deal with the bird’s territorial behavior. An inability to adequately train your bird can lead to long-term noise and aggression problems. That being said, they make great pets if you have the time to spend with them and the patience to train them properly.