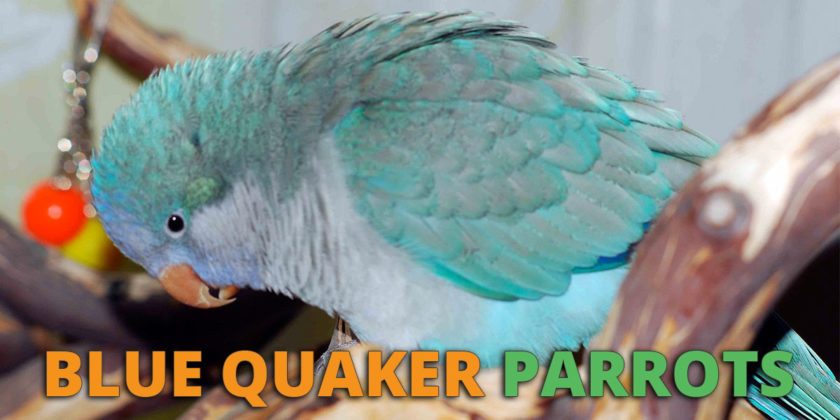 Blue Quaker Parrots are a variety of the Quaker Parrot that has become available through the selective breeding of captive birds. With the exception of their color, they are very similar to the original Quaker Parrots. They are fun-loving birds that enjoy socialization and make great avian companions.

Overview Of The Blue Quaker Parrot

Blue Quaker Parrots are a color variation of the Quaker Parrot, whose scientific name is Myiopsitta monachus. There are 4 subspecies within their general range. They are small, companion parrots that are also commonly referred to as Blue Monk Parakeets or Blue Monk Parrots. The Blue Quaker is not classified as a separate species.

Parrots.org states that these birds are native to South America, in particular, Bolivia, Brazil, Argentina and Paraguay. They favor dry wooded spaces and can also be found in urban and cultivated areas. Very adaptable to weather conditions, they have formed colonies in various portions of the United States as far north as New York. In some states, they are considered a potential problem to crops and it is actually illegal to own a Quaker if you reside in those locales.

Blue Quakers are about 11 inches (28 cm) in length. The Blues weigh about 3.5 ounces (100 grams), which is slightly less than the original green variety. They have blue backs and wings, a grey breast, black eyes with a white eye ring and an orange-yellow beak. There are no discernible physical differences between male and female birds, so DNA testing is required for gender identification.

Quakers are known as very confident birds that act as if they were much larger. This quality is part of their allure as pets. They have a large personality in a relatively compact package. They have very engaging personalities and are often thought of as comical due to their playful behavior. Quakers are small, sleek birds and have long tail feathers.

In the wild these parrots make lots of screeching calls and are known to chatter incessantly while feeding. They are not particularly quiet birds and like to copy loud voices and sounds. Quakers have a great capacity for mimicking human language and can be taught to talk at a very young age of about six months old. Here is a video of a Blue Quaker swinging and talking.

What Kind Of Personality Does A Blue Quaker Have?

Blue Quakers are high energy birds that love to play in and around their cage. They love chew toys, but are fairly destructive with them, so be prepared to regularly replace their playthings. Quakers also get bored more quickly than some other parrots, again necessitating the rotation of a good supply of toys to keep them happy. They also like puzzle toys and are very mechanically inclined and according to beautyofbirds.com will often build nests with found items in the home.

They enjoy interacting with the humans in the house and are not exceptionally prone to becoming one-person birds if given the opportunity to socialize with multiple people. These birds are not shy and they seem to not care that they are small when interacting with other creatures. This characteristic should cause caution if considering a Quaker for a family with small children. Your parrot may see the child as someone it can dominate and cause problems with biting.

In the wild these birds form large flocks. In captivity, they can become very defensive and possessive of their cage and have been known to seriously injure or kill a new bird that it has not “invited” into its house. If you want a friend for your Blue Quaker, the best bet is another Quaker. Due to their cage defense, you will need two cages until the birds bond. Quakers will bond with each other and not neglect their human bonds, as is not always the case with other parrot species.

These birds are named for their distinctive quaking and shaking, which may appear to be a problem but is completely normal. Here is a video that demonstrates this behavior.

The fearlessness and intelligence of Quaker Parrots can be a challenge when attempting to train them. They can be taught a few tricks and are very adept at learning words and other household sounds. Patient guidance is required to keep them from developing bad habits such as excessive chewing, biting and screeching.

Caring For Your Blue Quaker Parrot

Quakers are comfortable in temperatures from 60 to 80 degrees Fahrenheit. They can tolerate colder weather in the wild as seen in the wild flocks in some U.S. states where the temperatures can get quite cold.

According to quakerparrots.com, their diet should be pellet based with plenty of fresh fruits and vegetables. Some seeds can be offered, but should only be a small part of their dining options. They can get bored with the same food every day, so variety is recommended.

The minimum size cage for your Quaker is 18x18x18 inches with 5/8 inch bar spacing. A larger cage is better as you can put in more toys and perches to keep your bird stimulated.

Quaker Parrots generally have a major molt at the same time each year and may have several smaller molts in between. While molting, your bird should have the opportunity to bathe daily and misting them often helps soothe them during this trying time.

Even when not molting, water for bathing should be offered frequently. As with other small parrots, proper placement of cement perches can reduce or eliminate the need to have the bird’s nails clipped. If they do become overgrown, then have your vet trim them or show you how to do it yourself.

Breeding is fairly easy with these birds and they are one of the few parrots that build their own nests. In certain parts of the United States, it is illegal to own or breed these parrots as they are considered a nuisance animal. When they are bred, they have a clutch of 4 to 6 small, white eggs.

Mental and physical stimulation is critical to keeping healthy and happy Blue Quakers. They get bored easily, so need new toys and playthings regularly to maintain their interest.

Blue Quakers can live up to 20 to 25 years in captivity. They are prone to fatty liver disease and hypertension, so avoid fatty foods and those high in sodium. They can also catch Pacheco’s disease and will engage in feather plucking if they are not given enough attention and mental stimulation. Quaker Mutilation Syndrome is a problem with these birds when feather plucking is not addressed and curbed in a timely manner.

How Much Do Blue Quakers Cost?

If they are legal in your area, a baby hand-raised Blue Quaker will cost an average of $400. You also need to consider buying a roomy cage, toys and accessories. As these birds will go through many toys, either chewing them up or getting bored, this is a major budget factor that needs to go into your decision to share your home with a Blue Quaker. Fresh foods and the occasional vet visit will also add to the overall cost of their care.

Is A Blue Quaker Right For Me?

If they are legal in your area, Blue Quaker can make nice pets. They are not recommended for families with small children and are noisier than some other small parrots. Their destructive nature regarding playthings will add to your costs in keeping these parrots. If these considerations are not a deterrent, then a Quaker can make a great companion parrot that will give you years of enjoyment.