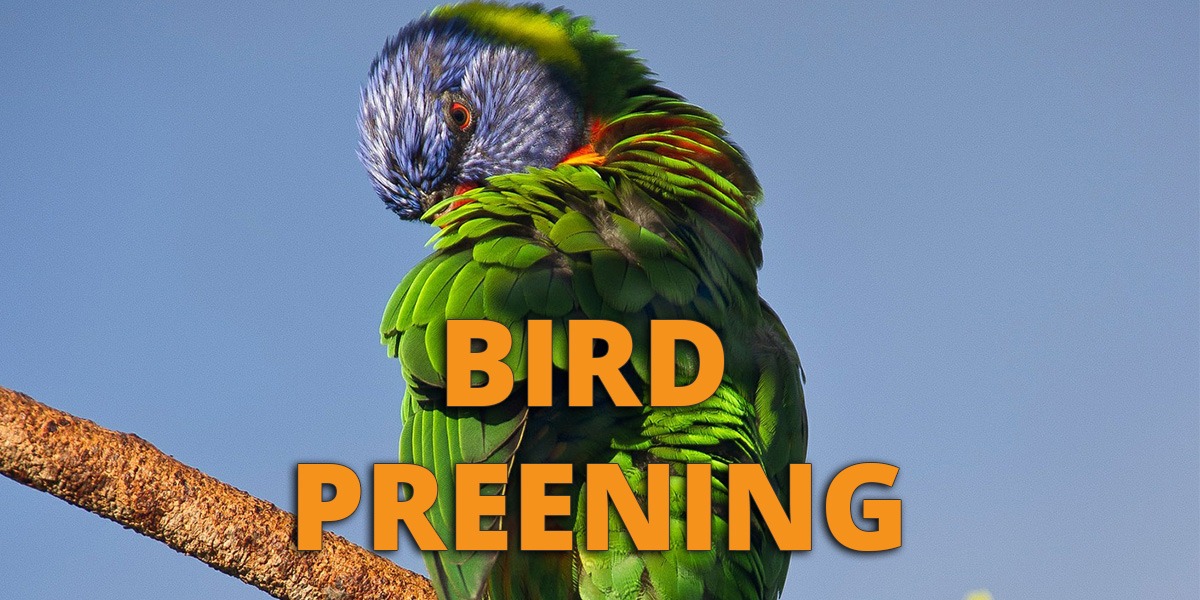 Many animals engage in some kind of self-grooming activity. In most cases, this behavior is done for reasons that are far more important than simply managing their appearance. Self-grooming in birds is called preening. You will observe this behavior regularly in your pet birds.

Like their human caregivers, who groom both for hygienic and social reasons, our pet birds are preening themselves to maintain their health and keep their feathers in good flying condition. Sometimes they just want to look good too. It is an essential part of their daily routine. If your bird is not preening it usually indicates a physical or psychological problem.

Why Do Birds Preen Themselves?

Birds preen themselves for a number of reasons. They all have some bearing on their well-being.

What Is The Preen Gland?

Located at the base of the tail, the preen gland is the source of the vitally important preen oil. This uropygial gland is found in many, but not all birds, with Amazon parrots being among those species with no preen gland. Birds without a preen gland tend to produce more feather dust than those with a preen gland.

The bird collects the thick, transparent oil on its head and beak and then rubs it into its feathers. The oil assists in weatherproofing the bird and keeping the feathers and skin soft and healthy. Lack of preen oil will lead to brittle feathers that can be damaged during flight. Preen oil also has antibacterial properties which help maintain the bird’s health.

The preen gland can become enlarged and become a health risk to your pet bird. According to Rick Axelson, DVM, the most common cause of an enlarged preen gland is a blockage caused by vitamin A deficiency. Treatment involves removing the blockage and correcting the bird’s diet.

How Do Birds Preen?

Birds systematically address each feather with the beak and feet, gently biting and stroking the length of the feather to improve its alignment. They also collect oil from their preen glands and spread it where needed. You will see your bird get into some very interesting positions as it gets to all its feathers.

This process is very time-consuming as birds have many feathers, and need to visit each one every day. A healthy, happy bird will spend at least several hours a day preening its feathers.

Other methods are also used to maintain healthy feathers. Wild birds often will engage in dust bathing, which helps remove excess preen oil and loosen parasites. Water bathing and sunning also contribute to the well-being of the feathers.

Stretching helps align feathers after preening and is also used to separate the feathers slightly so they can be stroked from base to tip.

Maintaining the bird’s feathers is not the only reason for preening. As mentioned above, bonded pairs engage in mutual preening that serves to strengthen their relationship. Here is a nice video of two caiques preening themselves and each other:

Birds of the same sex will also preen each other. I have two female, green-cheek conures that were purchased separately and have their own cages. They spend a considerable amount of their daily free time to preen and groom each other.

Watching this behavior over time reveals that this practice builds trust between the avian housemates. Reserved and occasional preening grew into a strong bond between these birds, to the extent that one will close its eyes and let the other groom right around the eyes area. They are relaxed and obviously enjoy this interaction.

Pet birds will also bond to a human and in many cases will attempt to preen them. You may have had the experience of your parrot preening your hair or beard. This indicates that the bird trusts you implicitly and can be one of the joys of pet bird ownership. Check out this video for some human preening by a pet parrot:

You do need to take care that your bird does not over-bond to you, which can lead to behavioral issues. Check out the quakerparrots.com website for some tips on what to look for, and how to deal with, the problem of over-bonding between humans and parrots.

What To Look For If Your Bird Stops Preening

A happy, healthy bird will spend several hours every day preening itself. You should be aware of this behavior and pay attention to any significant changes in the bird’s routine. Inattention to preening usually indicates that your bird is suffering from some kind of ailment.

Your bird may not be feeling well and this will cause it to neglect its own upkeep. There could be a blockage of the preen gland or some other physical ailment at work. A trip to the avian vet may be in order if the bird does not quickly return to its regular preening habits.

Depression in your pet bird may also be manifested in its lack of preening. This can be caused by moving, loss of a mate, or boredom and lack of mental stimulation. Knowing your bird and its habits will make it possible to detect these issues and attempt to resolve them to regain your bird’s health.