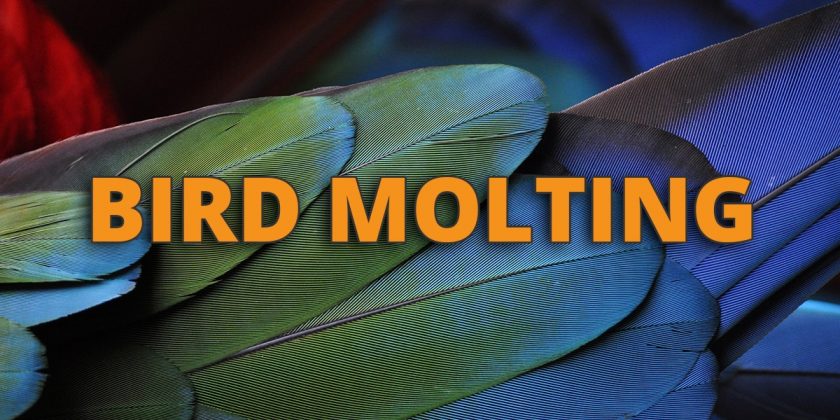 Just as mammals shed their fur and reptiles change their skin, so do birds molt their feathers. Yet, for some reason, people are often surprised and even freaked out when they see a molting bird.

There are even plenty of cases where new bird owners try to return their bird or bring her to a vet because of her simply molting. And while this is definitely ill-advised, it’s also kind of understandable – bird molting isn’t talked about as much as fur shedding or reptiles’ change of skin and as a result, some new bird owners get caught by surprise. There is nothing to be freaked out about, however – bird molting is completely natural and harmless and all birds do it.

According to AllAboutBirds, molting is most obvious in bigger birds and ones with longer primary feathers. In small birds, it’s possible for bird owners to remain oblivious about their birds’ molting for quite some time. Molting is also characterized with a change in the bird’s plumage, which results in a slight change of color. For example, in black or darker colored birds, when molting you can notice that the new feathers contrast the old ones. In the video below you can see an example of an Indian Ringneck parrot that’s molting:

Because all birds are different, so are the molting signs you can expect to see. If you’ve just gotten a bird or you’re planning to get one, it’s best to familiarize yourself with all of its characteristics, including the specifics of its molting by checking out our species guides.

When do birds molt?

Generally, molting is rather taxing for the bird in terms of the energy it requires. That’s why it doesn’t coincide with migration and breeding and usually falls between July and August for North American birds. For birds from other parts of the globe, the exact time may vary – many tropical birds molt after August and in September/November. Even just among North American songbirds, however, there are many differences – some do it before migrating south and others do it just after. Some species also have a winter semi-molt where they replace their head and body feathers but keep their flight feathers on the wings and tail.

How often do birds molt?

The size of the bird is important as well, since bigger feathers are harder and more energy inefficient to molt. According to Audubon, smaller species tend to molt once or twice per year, while big birds like eagles and pelicans molt only partially every year, replacing just their oldest feathers.

Why do birds molt?

Birds molt for the same reason a lot of other animals change their outer layers, be it fur, reptile skin, exoskeletons, and so on – simply because their feathers wear out. With feathers in particular this is very important, as birds use them to fly and not just for physical protection. Activities such as rubbing into leaves and bushes, preening, dust bathing and just flying itself slowly damages the feathers and requires molting.

Feathers are generally made out of keratin, which is the same protein that makes up our hair and fingernails. Unlike hair and fingernails, which regenerate and grow continuously, however, feathers can’t do that or they wouldn’t be suitable for flight. Hence – molting.

What are the different types of molting?

As we said, birds molt in different times of the year and sometimes not even every year, depending on their species. However, there are 4 general types of molting that can be ascribed to birds as a whole:

What should you do while your bird is molting?

While molting is necessary, it is not without its risks, especially in nature. While they are molting, birds have troubles flying, which means that they are both defenseless and face difficulties finding food. Additionally, they need extra nutrition because of how energy exhausting molting can be.

Below is a great video by Leporello the Goldfinch that better demonstrates the care you should give your bird when she’s molting:

Molting is a natural process that every bird owner should become familiar with. However, it is different from feather loss that is the result of plucking. To understand the difference between molting and feather plucking, check out our article on feather plucking. Feather loss can also be a sign that your bird is sick or lacking nutrition, you should keep an eye out for feather stress bars and also any other signs that your parrot or pet bird is sick.