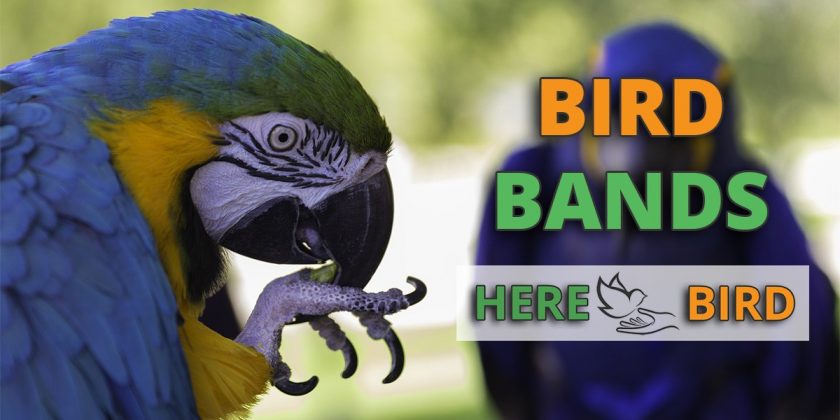 Leg bands are one of the most common forms of avian identification. They are used in captive pet bird situations as well as in the wild by researchers to track bird populations and migratory habits. Understanding how to identify bird bands can help you to understand potential problems with a bird being sold (for example you might be able to identify if has been illegally captured). Let’s take a look at bird leg bands and what a bird enthusiast needs to know about these small and important objects.

Identification is the primary reason that bands are put on a bird’s leg. The band will usually have a series of letters and numbers which may indicate the bird’s breeder or the organization that placed the band on the bird. A parrot that does not have a leg band may well have been illegally obtained and you should avoid purchasing such a bird. The practice of banding has helped slow down the illegal bird trade in the United States. You should make note of the information on your bird’s band and keep it in a safe place in the event you ever need to identify the bird in this manner.

Breeders may band their birds for ease of identification when dealing with multiple animals of similar appearance. Bands are also often used by poultry farmers. Wild bird populations are monitored using leg bands and recapture of the birds during subsequent seasons. They have helped scientists and conservationists determine migratory habits and behavior patterns of various species. If you find a wild bird with a band, you can report it at the Patuxent Wildlife Research Center Bird Banding Laboratory which may add to the knowledge researchers have about the bird you discovered.

Closed leg bands are usually constructed out of stainless steel or aluminum and are a small, solid, circular metal band. They are used by breeders and placed on very young birds. They are proof that the bird was bred and not harvested from the wild. They contain information that indicates the breeder as well as a series of numbers. Unfortunately, it is hard for an individual to track down the breeder through this information unless the bands were obtained from an organization such as the American Federation of Aviculture.

Open legs bands can be placed on mature birds and are used for a variety of purposes. The band has an opening and is not completely closed. Open bands are used by wildlife researchers to identify wild birds and are also seen on parrots that are legally imported in the United States. In some cases, a plastic band is used on shorebirds or waterfowl.

In the United States, the United States Department of Agriculture (USDA) owns, operates, or regulates all of the import stations that a legally traded parrot must pass through before it can be offered for sale. The bands contain alphanumeric information regarding the location of the import station as well as some accompanying identification numbers. Birds are banded while in quarantine after being imported and before being introduced into the pet trade.

How is Leg Banding Done?

Methods of placing the band on the bird differ substantially depending upon whether it is open or cloased. Closed bands can only be used with very young birds, usually less than two weeks old. The bands need to be manufactured for the species of bird in question. Macaws will obviously need a larger band than a canary. Here is how either type of band is placed on a bird.

Closed Band – Chicks need to be banded at an age of between 2 to 3 weeks. Before this time the band will slip off their foot, and waiting longer than this will make it impossible to get the band on its foot without potential injury to the bird. If you miss the window of opportunity to place the close band, then an open band is the only alternative.

The chick is held and its right foot gently extended backward to get the bird to point its toes. The band cannot get over a clenched foot, so this is a critical step. Some Neosporin or similar antibacterial ointment is used to lubricate and prevent infection from minor abrasions that may ensue from the procedure. The toes are gently worked through the ring until all are through. It is critical to be extremely gentle during this process as the young chicks are extremely fragile at this age. Below is a video demonstrating this procedure on a baby cockatiel.

Open Band – Open bands are not complete circles and have an opening that allows them to be placed on a mature bird’s legs. After placement, the ring is pinched together to close it as much as possible. They are used for wild-caught birds and for young birds whose feet have grown too large for a closed band.

The bird needs to be held gently but firmly during the banding process. Sizing is key as a band that is too large can slip up past the knee joint or down over its foot preventing the bird from perching properly. Special banding pliers are used to secure the band around the bird’s leg. These pliers are designed to ensure that the band’s circular shape is retained. Below is a video showing a wild bird being banded.

Can Leg Bands be Removed?

The simple answer to this question is yes, but you need to consider a few factors before going ahead and having your bird’s band removed. It may be the only means of identification that you have for your bird if it is not microchipped. Lack of a band can make it difficult to sell the bird at a later date or to move to another location that restricts importation of wild birds.

Your bird can be injured during the band removal procedure. An unskilled pet owner should never attempt to remove a band. If you determine that you want the band removed, contact your avian vet and have them remove the band for you. Unless there is a compelling reason to take the band off of your bird’s leg, the best course of action may be to just leave it in place. You bird has grown accustomed to it and in most cases, it will not cause any serious problems.