Your parrot’s beak fills a number of important roles in its life. It serves as its primary defense mechanism. Captive birds which may not have flight as an option can be more prone to biting. Of course, the beak is used to eat, and many parrots have strong beak capable of cracking open seeds and nuts. If you watch a parrot when it is eating you will see that they can use their beak and tongue together in a delicate way, almost like a pair of hands. Preening, vocalizing, and feeding chicks are all other uses of your parrot’s beak.

While all birds use their beaks to eat and drink, parrots also use theirs to climb. Using their feet and beak, parrots navigate their environment with confidence and agility. If you observe your parrot moving around you will see it use its beak like a hand when it is moving. They will test the strength of a perch, or extend their beak to see if they can safely reach their destination. Then they grab on with their beak and pull themselves up.

Keeping its beak in good shape can be critically important to your bird’s survival. As your parrot’s owner, the responsibility falls to you if there are issues such as an overgrown beak that needs to be addressed. 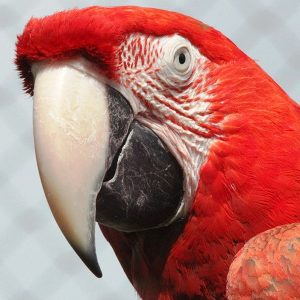 What’s Different About A Parrot’s Beak?

Parrots are also called hookbills due to the curved shape of their beaks. According to parrotfunzone.com, they have a short, wide beak with a curved upper mandible (with a ‘mandible’ being the upper and lower parts of a bird’s beak). The upper part is made to hook around the lower mandible which usually tends to have a pointed edge. The mandibles are made of bone with a hard keratin shell.

The upper mandible in parrots is more flexible than in other species of birds. Combined with its dexterous tongue and cutting lower mandible, this gives parrots the ability to manipulate and crush objects easily. The tip of the upper mandible is the most sensitive area of the parrot’s beak. An overgrown mandible will negatively impact a parrot’s capacity to eat and move normally.

What Causes an Overgrown Beak?

In their natural environment, overgrown beaks are usually not a problem in parrots. The daily activities required for the bird’s survival are enough to keep the beak trim and in shape. Eating and climbing will do their part in keeping the beak from overgrowth, and there is always an endless supply of branches and other objects for the parrot to chew.

In captivity, there may not be as many opportunities for your parrot to naturally control the growth of its beak. They may not need to climb in the same way in their enclosure. There may be a lack of suitable objects for them to chew, and they typically will not be constructing a roost which entails exercising their beaks. This can manifest itself in a gradual overgrowth, which will eventually become a problem and need to be addressed. Below is a video showing an overgrown beak on a macaw, and how it looked after trimming:

According to beautyofbirds.com, there are some other factors that may cause your parrot’s beak to become overgrown. They are:

How Can I Help Control the Growth of My Parrot’s Beak?

If you notice that your parrot’s beak is becoming overgrown, there are a few steps you can take to help alleviate the problem. They include: 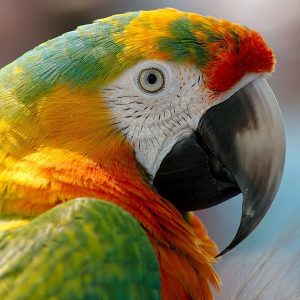 How Do I Trim My Parrot’s Beak?

Despite your best efforts to control your parrot’s overgrown beak, you may need to get it trimmed. It will take some time for dietary and lighting changes to take effect, and your parrot may need a trim in the interim.

According to petmd.com, the first step you should take is to bring your parrot to an avian vet. An examination can point to underlying physical causes of the overgrowth and point toward a dietary solution.

The vet will be familiar with what a normal beak should look like and can carefully perform the trimming. The blood supply in an overgrown beak often extends further down than in healthy beak, so care must be taken not to trim too far, as bleeding and severe pain will ensue. Below is a video of a vet performing a beak trim on an African Grey parrot:

Depending on the type of bird, beaks can be trimmed with anything from an emery board to a motorized Dremel drill. Nail clippers should be avoided as they can lead to a cracked beak. With proper training, you should be able to trim your bird’s beak yourself.

Beak trimming is a stressful procedure for your bird to undergo. The best way to deal with an overgrown parrot beak is to find the causes of the problem and make the necessary changes to your bird’s environment and diet. Your parrot will be healthier and happier if it does not need to undergo a beak trimming.