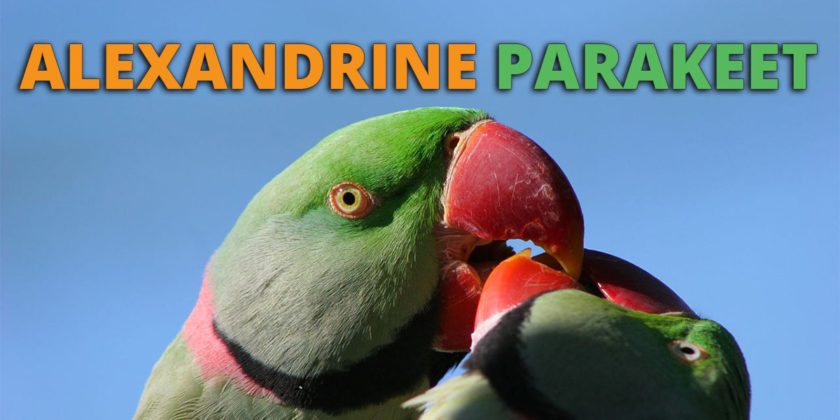 The Alexandrine Parrot is a medium-sized parrot that is related to the Indian and African Ringneck parrots. It is named after Alexander the Great, who was instrumental in the early exportation of these birds from their native India and Southeast Asia to Europe and the Mediterranean region where it became a favorite bird of nobles and royalty. Its scientific name, eupatria, comes from a Greco-Latin word that literally means “of noble ancestry”.

The Alexandrine Parrot’s full scientific name is Psittacula eupatria, and it has numerous common names including the Alexandrine Ring-necked Parrot, Great-billed Parakeet, and Large Parakeet. According to parrots.org, There are 5 subspecies which are distinguished by slight color variations and specific native ranges, such as the Large Burmese Parakeet and the Large Ceylonese Parakeet.

This companion parrot’s native range is distributed throughout Southeast Asia and India. Though not considered threatened in general, trapping and habitat destruction have caused wild populations to decline, especially in Thailand, Cambodia, and Laos as reported here by the IUCN.

These parrots have large heads and long tails and are mostly green with a pink collar. They have red beaks and some red on their shoulders. Mature males are distinguished by a wide black stripe under its cheeks which is absent in females. They average 22.6 inches (58 cm) in length and weigh about 9 ounces (255 grams).

Appearance and Vocalization of Alexandrine Parrots

It is no surprise that these parrots were favored by royalty as they are strikingly beautiful birds. Their tail is often as long as the rest of their body, giving them a sleek appearance. They are playful birds, as this video of some Alexandrines playing basketball demonstrates.

These parrots can be loud, and in the wild, they make loud and harsh shrieks, in particular when they are alarmed. In captivity these loud shrieks can be a nuisance, but the Alexandrine Parakeet is also very adept at mimicking human words and household sounds. Teaching it to talk can help reduce its desire to shriek, but be warned that some will never learn to mimic your voice. Here is a video of one talking and exhibiting its native vocalization.

Behavior And Temperament Of Alexandrine Parrots

This parrot is a very curious bird, and its large and strong beak can do serious damage to your home if the bird is unsupervised. You should provide your bird with plenty of chew toys to attempt to curb this behavior. They will often destroy a toy within hours, so you will need to keep a good supply on hand. Despite the large and imposing beak, they are not problem biters.

Because they are playful and not usually too nippy, the Alexandrine can make a good family pet. Proper socialization among all family members will inhibit the bird from bonding too closely to one individual. They are gentler and less aggressive than the closely related Indian Ringneck, with the males being easier to handle. Females may become nippy during the breeding season, but in general, biting is not a huge problem with these birds. Alexandrines love to be held and with proper supervision, they can be good parrots for families with children. 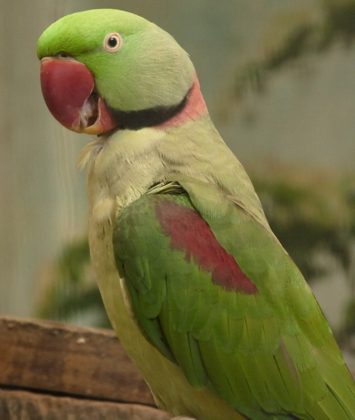 These active birds love to fly and should be given ample opportunity in a sizable area. They can be very independent and can be stubborn regarding activities that they are not inclined to engage in at the moment.

This independence does enable them to occupy themselves with their toys, but they also crave interaction with their human companions. Very social, these parrots will often be drawn to a new person in the room, almost to the exclusion of other, more familiar faces.

Best kept in their own cages, you can have several of these birds and allow them to interact when out of the cage. If introducing a different species to the mix, the new bird should be of similar size to avoid having your Alexandrine try to dominate the newcomer.

These intelligent birds can be trained and you should impose strict guidelines on your parrot from the beginning of your relationship. According to indianringneck.com, Asiatic parrots, in general, are best trained by ignoring unwanted behavior. Your voice should be used only for praise and accompanied with a reward for good behavior.

As mentioned above, they can often be trained to mimic human words. This is best accomplished by simply repeating these words when you are around your parrot. Eventually, they will pick up on it and repeat the sounds. It’s important to train your parrot to only leave its stand when you ask it to step-up. If it leaves on its own, replace the bird until it gets the idea. This can help control the playful, yet destructive urges your bird may have if it has free run of your home.

How Do I Care For An Alexandrine Parakeet?

Alexandrines can tolerate temperatures between 40 and 90 degrees Fahrenheit. These parrots have large wingspans, so need a cage that is at least 36x24x24 inches with bar spacing of 3/4 to 1 inch. The cage should be larger if possible, as these birds need plenty of room to flap their wings and toys to keep them mentally stimulated. The bars must be strong as these birds have some serious power in their beaks and can damage a flimsy cage.

Additionally, a parrot stand is recommended for your bird. This can be a separate unit or be on top of its cage. Your bird will enjoy being out of its cage and the extra room to flap and stretch its wings gives it more opportunity to exercise.

These birds love to bathe, but will only do so when they are so inclined. When a bath is offered, it may be refused if the bird is not in the mood. Continue to offer them baths regularly. Here’s a video of one in action in its tub.

You will probably need to regularly clip your parrot’s nails, so it is advised that you learn how from a trained avian vet. Molting occurs twice a year and lasts around three weeks.

Your Alexandrine Parrot should be fed a variety of foods, with a bias against sunflower seeds and other fatty substances. A pellet-based diet supplemented with plenty of fresh fruit and vegetables will work well. To avoid boredom, try not to offer the same food every day.

In the wild, their breeding season is from November through April, and they produce a clutch of 2-4 small white eggs. Unlike most other parrots, these parrots do not bond and mate for life, and aggression during mating season can at times lead to serious injury to the birds.

How Long Will An Alexandrine Parrot Live?

The average lifespan for these birds is 25 to 30 years. They are generally healthy birds and do not often engage in self-destructive feather plucking. They can be prone to fatty liver disease and other ailments related to improper diet, so care should be taken in this regard.

You can expect to pay anywhere from $200 to $600 for your parrot. You will also need to purchase a large, sturdy cage and a parrot stand. Be prepared to regularly replace toys that your bird destroys, as this is needed for their mental well-being. Nail clipping may be another expense, as well as a regular supply of fresh foods to keep your bird happy and healthy.

Is This The Right Bird For Me?

While these birds make great family pets due to their tolerance of many human companions and their gentle nature, there are some cautions to be considered. They can be noisy and will chew up your home if they get the chance. You also need a roomy area to let them fly. Take these factors into account before purchasing one of these beautiful parrots.